"A chair is to have no backside. It should be beautiful from all sides and angles." - Hans Wegner

One of the design icons of the 20th century - Hans Wegner's "Wishbone" chair, first produced in 1949 by Carl Hansen in Denmark is instantly recognisable. Still in production today and now available in a multitude of colours and finishes, the continued demand speaks volumes for this visionary designer's abilities. I wonder, how many of today's designs will not just stand the test of time, but will also be popular and desirable across all age groups in 60+ years time?

We've been very lucky to have restored many of these chairs, inevitably most of the early ones we see have been in the same family from new and have often travelled around the globe with their faithful owners. When you talk to the owners, it quickly becomes obvious that their chairs are old friends that they couldn't bear to lose. Maybe that's why so many are quite happy to have them restored once they are looking tired and neglected - a bit like paying for someone you love to have a full facelift!

They're not the easiest of chairs to restore, (as I've said on this blog in the past!) and I do still wonder whether Mr Wegner ever actually did chair seat weaving because some of his designs really do test even the most experienced weavers full range of skills to the limit. But then nothing worth having is ever easy is it? Sorry for the ramble, but as we are working on 9 of them at the moment I've got loads of time to ponder....it occurred to me that we could do with a few more Mr Wegners - it would solve a lot of problems, (bear with me!) You see really good design lasts forever. Why change something when you still love looking at it and it functions so well that nothing can beat it? An end to some of our "throwaway" tendencies perhaps? Hmmm..... 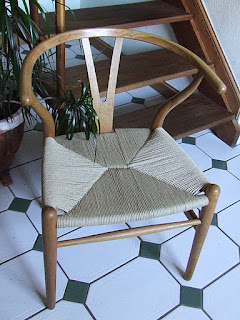 So here it is today, in all it's "Former Glory", an early Wishbone chair with it's freshly cleaned frame and a new seat. The next set we're working on were going to have black woven seats, but there are problems with the colourfastness of the new cord. Having discussed the problems with the chairs owners, they decided that they would like to have them home by Christmas, so they too will now be woven in the natural coloured cord. Otherwise they would have to live without them for another couple of months before the new colourfast black cord is available.

See what I mean about loyalty? 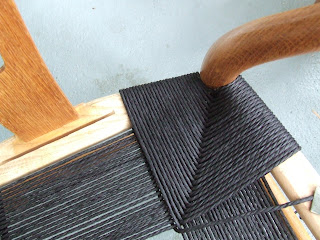 "Many foreigners have asked me how we made the Danish style. And I've answered that it...was rather a continuous process of purification, and for me of simplification, to cut down to the simplest possible elements of four legs, a seat and combined top rail and arm rest." - Hans Wegner
Posted by Kim

Lovely work on the Wegner chairs as usual, too bad we can't get the black Danish cord over here on this "side of the pond" though. I love the look of it and have admired other pictures of those chairs woven with the black. Wonder if it's just too expensive to import over here to the USA? What country manufacturers it for you? Thanks!
The Wicker Woman-Cathryn Peters
http://www.WickerWoman.com/blog

Hi Cathryn, thank you for your kind comments. The cord is made right here in the UK for the Danish market. At the moment they are making all sorts of colours including white! I think shipping costs to the US would be incredibly expensive which is a shame. Is it worth asking cord manufacturers over there if they could experiment with making a black version?