No snow yet, the sun is shining and the scenery is wonderful but it is absolutely freezing here, -3 degrees with a biting, spiteful wind. But the good news is that all of our messy building work is complete and we are finally fully installed in our new workshop. What a baptism, the coldest weather for years just as we have finished moving in!

And here is the overall view from the front 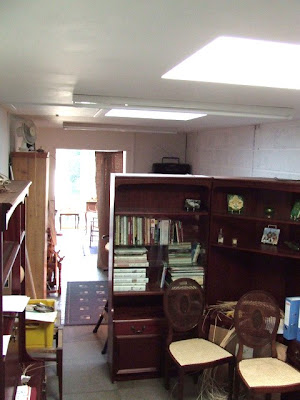 The area behind the bookshelves is the "clean" area where we do weaving and finishing, beyond that, through the opening is the original studio which is now our "dirty workshop" where we do any woodwork repairs and colour matching. 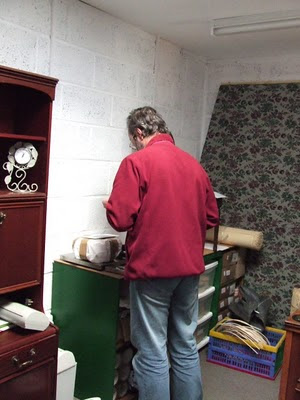 This is where the mail order is processed. All very cosy - despite the weather.
Posted by Kim No comments:

It might be because we're coming up to Christmas, or perhaps it's just our own fault for trying to do so many things at once, but there never seems to be any spare time at all - not even to put updates here on the blog.

So a quick catch up!

We are currently out of stock of thick paper fibre rush in "Antique" finish. A large consignment will be arriving within two weeks, so unfortunately any orders received cannot be processed until then. Apologies in advance for any problems this may cause. We do however have plenty of thin "Antique" and both thick and thin diameters of "River" paper fibre in stock.
Posted by Kim 2 comments:

Email ThisBlogThis!Share to TwitterShare to FacebookShare to Pinterest
Labels: News and updates

Word of the week

A rhetorical figure in which incongruous or contradictory terms are combined, as in a deafening silence and a mournful optimist.


A verbal contract isn't worth the paper it's written on. - Samuel Goldwyn
Posted by Kim No comments:

Word of the Week.

Trying to appear full of holiness or goodness

Just remember, there's a right way and a wrong way to do everything and the wrong way is to keep trying to make everybody else do it the right way. - M*A*S*H* Colonel Potter. 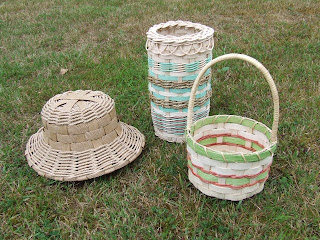 This "hand made by me" Bridesmaids Berry Basket filled with local Dorset goodies and produce!! So help me out please, what kind of basket would you like to be able to make if you could choose? You can either e-mail me at sales@formerglory.co.uk or leave me a comment here on this post or the previous prize post here with your suggestions. Entries accepted from Europe and America/Canada, (because the postage isn't too bad!) but sorry to all in Australia/New Zealand, this package would be a bit too large and expensive to send, but then I can always organise a different prize........So please don't be put off from entering.
Posted by Kim 1 comment:

We seem to have had paintbrushes in our hands for much of the last three weeks. However, it does finally feel like things are moving on. The floor of the studio at the back of the workshop was in a terrible state, look at the difference a lick of paint makes: 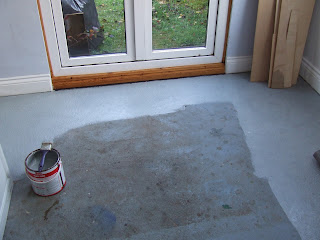 It's covering up five years of spills and other work related mess! It was in such a poor state that I was ashamed, but it's starting to look good now, should be finished by tomorrow night.

Meanwhile, I haven't forgotten the basket design competition sorry that it's been a bit delayed......but I do have a cunning plan and will be making an announcement very, very soon.
Posted by Kim No comments:

Word and Wisdom of the Week

The quality of being asinine, stupidity combined with stubornness.
Wisdom of the Week:
'Tis better to be silent and be thought a fool, than to speak and remove all doubt. - Abraham Lincoln
Brilliant advice!

Water, wind and the lack of electricity

Blogging has been out of the question for the last few days. Since Thursday when the new electricity consumer unit was fitted, we have had fun and games! All was well on Friday and Saturday, we actually managed to finish off some proper work - a couple of French chairs with an unusual seat weave, here's one finished and one about to be stripped: 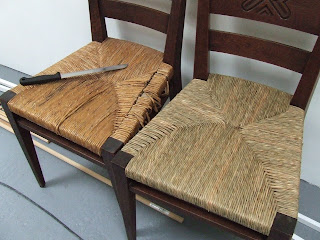 and the rewrapping of a sweet little Liberty's Tudric teapot handle: 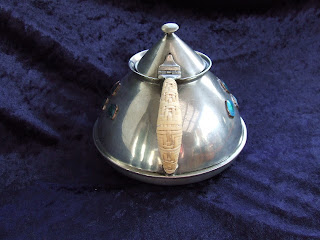 Then everything went "pear shaped".

On Sunday we were all set to start work in the workshop - the final push towards moving in properly - when the electricity tripped out! Our electrician tried really hard by phone to help us to sort the problem out, but the new consumer unit was having none of it. He decided he would come around to investigate......

A new problem, we had a neutral earth leak?!! After two hours, the electrician isolated the offending circuit so that at least we had heating and light throughout the house and power to three rooms. But none of us were any the wiser as to what the problem was. Yesterday he came back again and thanks to his many years of experience, he found the problems and thank goodness he did. There were two dangerously wired power points that we didn't even know existed - inside a wardrobe! We have been very lucky, because if at any time these two power sockets had overheated, there would have been a fire.........

Whilst all of this was going on and just to add insult to injury, we discovered a water leak in the new garage roof. A puddle had formed perfectly on the new boarding that we had only fitted on Saturday - right next to some electric wires! Frustrated we called the builder who came to investigate almost immediately. It was as we'd suspected, the freak wind and heavy rain was so intense on Saturday night that it had driven the water up and under the lead roof flashing.....remedial work will be done later this week, assuming it stops raining for long enough!!

We are so lucky to have such good people to look after us.

Back to normal now, so a lot of catching up to do.
Posted by Kim No comments:

On Thursday 4th from about 9.15am we will be without electricity!! The electrician is fitting a new consumer unit and he isn't sure at this stage how long it will take, but probably most of the day.

Our phone will be working and we will be in the office taking calls as usual, but please bear with us, processing of orders will be delayed until the power is back on and we can use the computer. Responding to e-mails will also be held up for the same reason.

Sorry about this, but it has to be done and hopefully it will mean that we will have a safe and reliable system forever!
Posted by Kim No comments:

Email ThisBlogThis!Share to TwitterShare to FacebookShare to Pinterest
Labels: Notices

Word of the Week

Procrastination - the counterproductive deferment of actions or tasks to a later time.

Colouring and tinting new cane to look like the old stuff!

There seem to be a few schools of thought when it comes to whether new bright cream cane should be coloured to look old or not. A lot of caners I know just refuse to do it, others are loathe to try because the results can be a bit disappointing, then others feel that the cane should be allowed to age and discolour naturally.

Recently we've had a lot of panels that had to be coloured and I must admit that some of them have been a challenge! Like the modern bench seat below..........almost purple....! 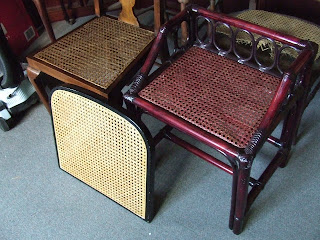 The panels above are new replacements and were bright cream, they have all been tinted to one degree or another. 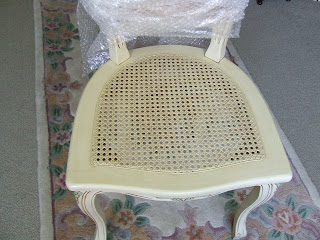 I only ever use powder water based colouring which can then be sealed using oils or shellac to give the final desired colour and I only tint the reverse of the panel if it shows, like on a back. The colour is mixed to match as closely as possible in the pot first before application, then it's "one hit" to get it right. 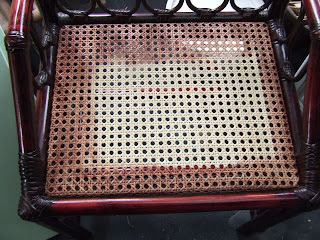 Fiddly, but sometimes it just has to be done!
Posted by Kim No comments: