It's been a funny few weeks, by that I mean funny in an odd way, not funny haha sadly!

We knew there were two important tasks we had been putting off that could wait not longer. First was restoring the woodwork and cab on Bernard our trusty old Bedford horsebox and the second was to sort, cut and bundle a mountain of raw rattan poles into more sensible and manageable sizes.

As luck would have it the weather has been okay for the past few weekends, so in between the odd shower we donned masks, ladders and sanders then threw ourselves at the mammoth task of horsebox restoration. Bernard is 10'6" tall and 19' long, so to say it's a big job washing and sanding that lot is a severe understatement. Meanwhile we had phoned the mechanic to ask him if he could check Bernard over for his annual "plating" test, thinking that we had plenty of time as we don't need to use him until the end of August. So imagine our shock when the mechanic told us that we'd better get him down to his yard asap as the testing station was already fully booked until, (you've guessed it) the end of August!

So panic ensued, pressure applied. We worked away madly for three solid weekends and then took the truck to the mechanics yard. We're all keeping our fingers crossed now that we can get a cancellation at the local testing station, otherwise it will be a 40 mile plus trip each way to the next nearest one! 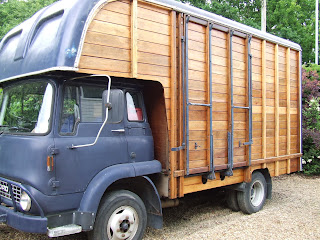 So this is what he looked like when he went to the mechanic. Woodwork almost finished and the cab only partly started. Ooooh I hope we can get him tested and back home soon, still lots to do.

So once the truck panic was over, we girded our loins for sorting out the rattan pole problem. Last Wednesday, the two of us plus two friends (probably now ex-friends) set about the task. I hate to admit it, but the old adage "out of sight is out of mind" is so true. We had genuinely forgotten just how much rattan we have. At first we were optimistic that we could achieve loads in one day, but by the end of a VERY long shift, it was obvious that the job was going to take at least another week of concerted effort. This was the mountain we were looking at sorting and is only about a third of the total. 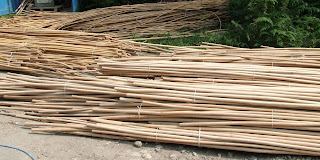 And here we are trying to decide where to start. 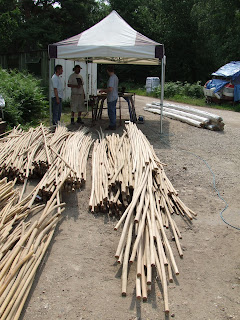 So we were a bit worse for wear after that lot and decided to have a gentler time this weekend. We've pottered about gardening and doing nice, quiet things like............ 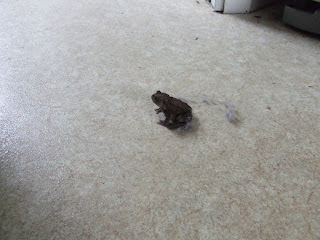 ......rescuing lost frogs from the middle of the kitchen floor. Don't ask.....I have no idea how he came to be there suspiciously covered in fluff from the tumble drier!

I wonder what next week will bring? 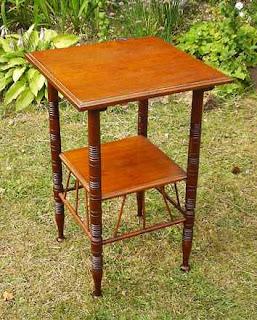 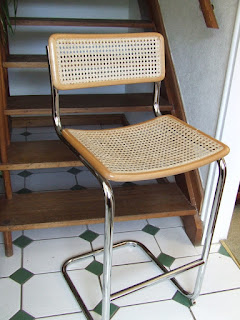 What say you?
Posted by Kim 2 comments:

At last it seems we have some sunny weather although the wind still has that northerly chill to it. We've been very quiet on the blogging front for a long time, mainly because so much has been going on that finding time to sit and write has been difficult. So today a chance to do a quick catch up!

Our Goddaughter came to stay with us for a few days last month and we had a lovely time. She is French and determined to speak English as well as her Mum, (who speaks English fluently). So while she was staying with us we arranged for her to spend time at the local infants school as a volunteer helper. I think the time was enjoyed by all, she played football and helped the children with their crafts to the point where she rubbed a blister on her hand from using the little scissors so often. The teachers told me that she was also very helpful indeed in the French lessons! Such fun.

Meanwhile we have been wading our way through a mountain of work, everything from an experimental woven piece using carbon fibre to reviving a marquetry table top, no opportunities for boredom here. 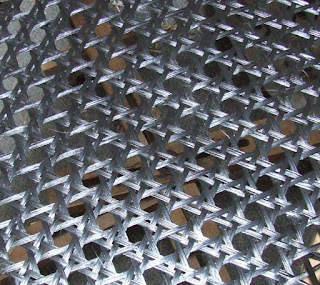 It is good to be able to work outside again, one of the great joys of being self employed is the freedom to change workplace whenever it suits. It also means that I can watch the local wildlife. We are so lucky, these little creatures breed every year in the bank of the yew hedge. Such a privilege to watch them emerge and then quite frightening when they start to fly!! 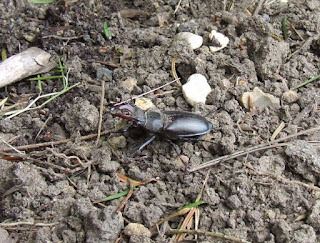