We know what we'll be doing for the next three months......... It all started a little while ago with a phone call from the National Trust. "We have a problem with rush seats on the chairs in a chapel, it's so damp that the rush gets mouldy and mildewy then it goes soft and the coils start to break....any idea what we can do?"

That's the trouble with natural materials and especially rush and seagrass seats, when they get damp and stay damp, mould and mildew have a field day feeding off the coiled rushes and the internal packing. It doesn't take long to happen and there's no quick fix. The last thing you need is for a member of the congregation to sit on a mouldy old chair seat in their "Sunday best". 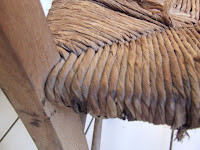 We suggested using paper fibre instead, it looks the same as rush but it won't hold the moisture in the same way and is much less likely to succumb to mould. So a decision was made, yes 40 chair seats would be replaced with paper.

The van turned up today full of little chapel chairs - all 54 of them.

Yes, I think that will keep me out of trouble for a while, well until Easter at least.
Posted by Kim

I don't know if I could do 54 straight chairs with the same seat. I think about number 10 I'd be looking for another seating project just for a change of pace.

Yes Jim, I think I may be bald by the end of the job! I've got a few "back burner" projects that I'm going to escape into so with luck, that will save my sanity.

I live in a damp apartment on a slab. I just discovered that mold has grown on one of my rush chair seats. I'm not sure if it's paper rush or sea grass but it is a gold/green varigated color that is twisted so it looks more natural than paper and has varnish on it. However, there are no ends poking out the bottom like you would expect if it was real rush. The bottom is woven to look the same as the top. It's not antique, but about 10 years old.
Is there any way to kill and remove the mold without redoing the entire seat? the mold is some on the top and a lot on the bottom so I think it is all the way through.

I heard that vinigar can kill about 80% of mold but don't know if that means 80% of kinds of mold or 80% of the existing mold you use it on. It is part of a large set, or else I could just reweave the seat with fabric strips. The seat is screwed on. I thought of putting the seat in a bag with a gallon of vinegar, but think that will damage the wooden frame of the seat. Is it possible to just buy a new rush seat and rescrew it on? Any suggestions? Thanks.

PS: I live in NY State and there probably won't be any dry, warm, sunny days here for a few months and don't want to leave this sitting around to grow till then.

It sounds like the pads are woven in pre-twisted rush, paper fibre shouldn't grow mould, it is specially treated. I wouldn't recommend immersing the pads in vinegar, you will do more harm than good! The only way to solve the problem is to deal with the damp in the apartment, maybe with a dehumidifier. You can then dry out the pads thoroughly and brush off the mould, (outside wearing a mask)and as long as the pads don't get damp again, they'll be fine. Until you deal with the underlying damp problem, even a new seat pad would start to go mouldy. Hope it helps.

There are a number of weavers in your area if you decide to replace the rush, have a look at Cathryn Peters website "wickerwoman", she has a list of weavers in the US.

Thank you for your advice. I really appreciate it.