It doesn't seem to make any difference at all how fully you understand that someone is seriously ill and likely to die, when the time comes, it is still a shock. Mother in Law died at 9.50am today. She had been in a dementia care home for just over two years. At the beginning of February she decided that she no longer wanted to eat or drink and quite honestly other than tube feeding, there was not a lot that anyone could do to change things. Her sisters were visiting regularly and reported that she was "drifting away", staring through the window and hardly speaking. She would have the occasional spoonful of ice cream, but not not nearly enough to keep even a bird alive. I did my research and it seems that this is not unusual in late stage Alzheimer sufferers, the brain can apparently stop sending out  hunger, thirst and even pain messages to the body. It is such a cruel disease.

She is at peace now, no more confusion or fear.
Posted by Kim 8 comments:

What a beautiful morning, but this afternoon it's back to typical April showers. It doesn't matter though, we spent a lovely hour or so wandering around the local bluebell wood earlier, it was gorgeous - warm, sunny and highly scented. The ground was still wet and muddy from all of the rain we've had over the past few days, but that was good because it made the flowers and earth smell even more. 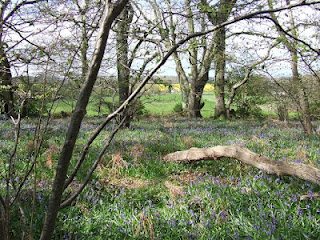 This view caught my eye, the bright yellow field in the background, a farmhouse and then the bluebells and trees in the foreground. The bluebells are not as prolific this year as they were last but they are a bit earlier, so maybe that has something to do with it. It was still a good show. 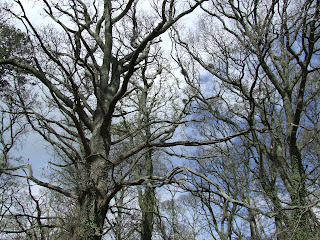 There are some really old trees in this woodland and the crows have built there nests very high up in them this year.

A lovely morning out.

This week I have been consumed working on a set of old spindle back dining chairs. You could say that they had seen better days, all four were "rocky", every joint either loose or apart. One had a broken back rail and another was missing two of it's spindles. A job like this seems straightforward and normally it wouldn't be too bad, just very time consuming. But when woodworm are involved, you never know how much their infestation will affect the work.

It didn''t take long for me to realise that the worms had been in residence for quite a long time! 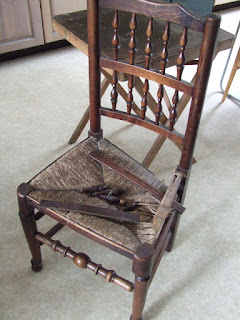 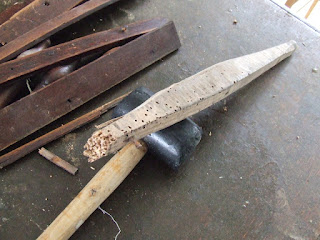 From the outside there are not too many holes, you'd think that it wasn't too bad - until you see the inside of the wood - just a honeycomb is left! So this leads you on to check all areas around the wormy wood just in case more of the frame is affected and so you end up chasing the damage further and further, making the workload bigger and bigger!

This is the replacement rail in progress. 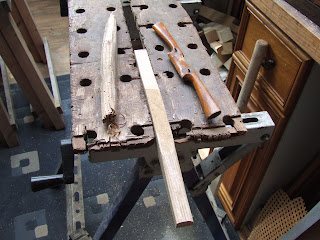 First the new rail was "blocked out" and then roughly hewn to shape. 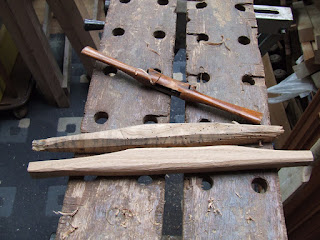 Then the slightly oval ends were turned on the lathe. 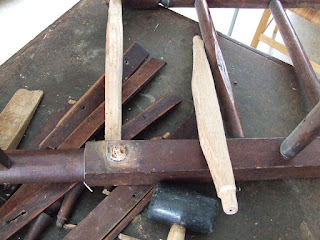 The remains of the honeycomb of wood need to be taken out carefully before the chair can be put together again!

So eventually number one of four is back together and we start on number two with the missing spindles. 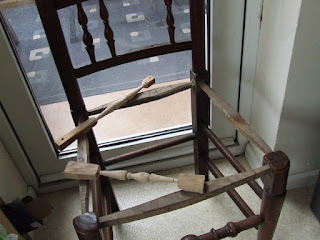 Two new copies made from old wood. For once I really enjoyed making these because we've got a new toy now, an electronic Vernier gauge and it is brilliant! It's so much more accurate than the old manual ones.

Then the chair had to come apart so that I could fit them, easier said than done! It's guaranteed that there will always be one joint that will not come apart no matter what! Anyway about two hours later I could get on with the fitting and colour matching. 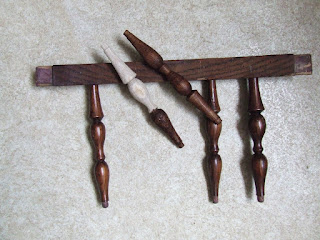 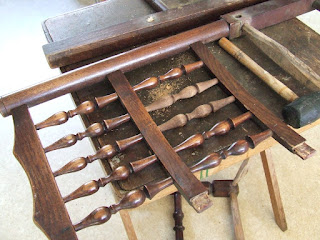 Luckily the other two frames only needed to be reglued. So after an overnight rest.... 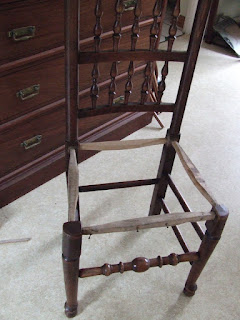 Magistretti Carimate, Bauhaus Cesca and a day off!

It's an absolutely glorious day here today, but I shall be stuck in the workshop replacing the cane panelling in yet more Bauhaus Cesca chairs. It has been another one of those weeks when virtually every day the postman has arrived bearing a boxed gift of either drop in Magistretti Carimate or Cesca seat frames! It keeps me out of trouble and I'm certainly not complaining, but by Sunday we really needed a breath of fresh air, so we went for one of those magical mystery tour drives....... 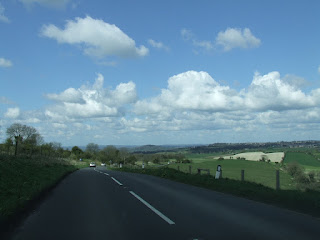 Over the hill at Longbridge Deverill, fluffy clouds and fabulous views of fields full of rapeseed and livestock. 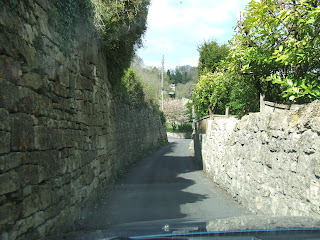 Then on to the tiny village of Limpley Stoke near Bath. The picture above is a road honest, you can see the top of the car bonnet! This is where Mr FG used to walk to school. 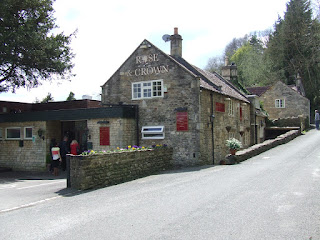 His parents used to run this pub at the top of the hill, the little attic dormer window was his bedroom for a few years. 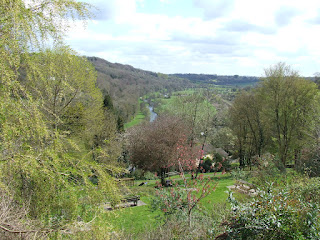 This is the view from the patio to the rear. You can see the river on the left and the railway on the right. Further across to the left is the Avon and Kennet canal, unfortunately the trees have grown so tall that you can't see it now. We sat and drank coffee while Mr FG tried to work out how the building had been altered over the years, it seemed that all but one open fireplace had been changed almost beyond recognition. It was good to sit and ponder, the past and the present, sadness and happiness.

Then we drove on. 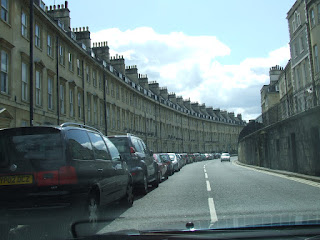 Into the georgian grandeur of Bath! 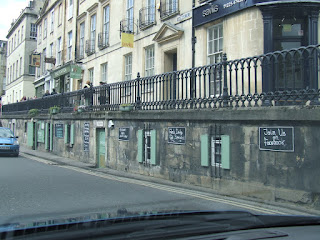 This is the "Hole in the Wall" restaurant, an amazing place built under the footpath and other buildings above.

We toured around the area randomly until about 3pm and then made for home. It was lovely, a real refresher. A tour around our past, how lucky am I?
Posted by Kim No comments:

Beekeepers, do you want to make a skep?

Bank holidays are never long enough are they?! Ho hum.

The pole pile sort out continues but we also have some other new materials to add to our ever growing arsenal, we have "D" profile centre cane wrapping and copious quantities of "B" grade 6mm wide lapping. The "D" profile is perfect for conservatory repairs, so flexible and it will take a colour. The 6mm glossy lapping is also good for conservatory repairs, but most of the time we supply it to beekeepers for making skeps.

A skep is the traditional housing for bees and the shape of them as a symbol is still used on millions of honey pots. Skeps are hand made from straw tightly coiled round and round then stitched together into a bell shape. There was a time when they could be seen everywhere until the angular wooden hives all but replaced them as favourites with the beekeepers. There is something quaint about the image, but in truth, skeps are liked by bees and if they're looked after well, can go on being used for decades. Being so lighweight and therefore easy to carry they're also perfect for catching swarms. I found this terrific 1970's film of a bee farm in Germany who were still using skeps for their bees, (complete with clear diction from a VERY English narrator!);

Sorry it's 14 minutes long but honestly it's fascinating stuff, stick with it! If after watching this you fancy trying your hand at making a skep give us a call. The 6mm glossy cane is perfect for stitching the coils and 1/2 kilo hanks are half price while stocks last - only £8, or if you've got millions of bees, you could make hundreds of skeps with a kilo of 6mm lapping for only £15. Just add straw!
Posted by Kim 1 comment:

Well no holiday for us, although later on one of my oldest friends is coming to visit for a couple of days so a good excuse for a bit of relaxation!

We're beginning to sort through the large pile of poles starting with the Malacca. We've already found some lovely long lengths without any nodes that will make beautiful walking sticks. 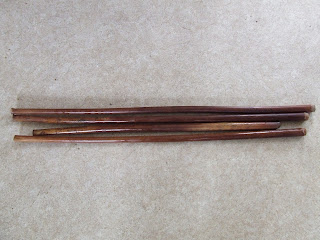 These four came from one single length, they measure between 26 and 31", so I'm sure someone will be able to do something with them. I found a tortoiseshell cane top that we'd bought years ago in a box of stuff, it fitted the cane exactly, I was amazed! 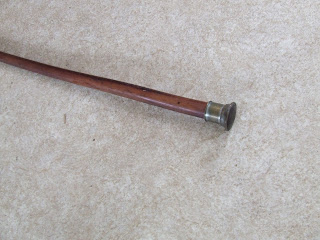 Handsome.
Posted by Kim No comments:

Manua, Tohiti and Malacca rattan, how many poles would you like?

If anyone was curious about our whereabouts yesterday, we were absent because an order arrived - several tonnes of it. It had to be fork lifted from a huge curtainsider articulated lorry then manhandled bundle by bundle into the store. 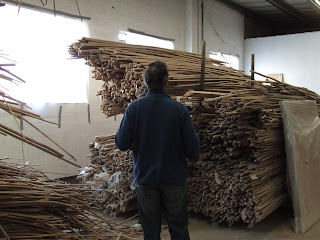 This is Mr. FG standing in front of one "pole mountain", there are another four like this one. Tohiti skin off and on, Manau in all dimensions and some beautiful Malacca. You name it! Unfortunately today we are suffering the consequences of kidding ourselves on that we are still young and fit enough to hurl a 40+ kilo, 18 foot long bundle over one shoulder and nonchalantly throw it 5 feet in the air to land in perfect neat pile on the rack. The reality is quite different, huffing and puffing whilst fumbling under a random pile of pliable poles that have expertly knitted themselves together, then trying to lift them even to shoulder height and drag them unceremoniously onto the ever growing pile is closer to the mark! I started the day well, first bundle of Manau was properly tangled into the one below. Having manipulated my hands into place under the bundle, Mr FG at the other end of said bundle lifted it two feet into the air - I tried to lift, but the poles were still trapped into the one below, the bundle snapped back taking my left hand with it......Now some of you that know me may remember that I have long fingernails that are so hard they need cutting with toenail clippers, well I've found out that Manau poles do a much better job of trimming my nails than clippers! The falling bundle sheared my middle fingernail off just above the flesh, but the nail on my first finger didn't give way and ripped off a quarter of an inch into the pink fleshy zone below - you know the really painful bit? Blood spurted everywhere as I ran to get first aid, which was a pink plaster and some masking tape courtesy of our friend Keith. I found myself holding the fingernail that came off, what I thought I was going to do with it I have no idea!

Today Mr. FG has bruises, aches and pains in places he didn't even know he had......even his aches have got pains! So this afternoon we do it all again and then over the weekend we will be sorting, labelling and generally getting to grips with the pole pile. Meanwhile the washing machine is on making a vague attempt to remove the thick film of rattan dust that enveloped us completely, we looked like ghosts by the time we got home.

Thanks to Tom for driving the fork lift truck and Thomas for helping us all day - without you we would probably have been in hospital by now!

And so....if you fancy making some garden structures, walking sticks or furniture, give us a shout, we may just be able to help.