Top jobs for the ladies?

This article by the BBC was bought to my attention by a friend on Twitter. They asked the question "Are women their own worst enemy when it comes to the top jobs?" The contributors came up with some good points about how women see themselves differently to their male counterparts in the workplace. How they can lack self belief, confidence and tend to be too cautious and not aggressive enough to get to the top jobs in their profession. Interestingly it also quoted that girls outperform boys at school and make up 60% of university graduates and yet only 32% of upper management in the general workforce are female. The article also cited some parochial reasons for the possible lack of female "high flyers" - motherhood, believing a woman's place is in the home..... etc.

Hmmmmm, I thought, but that reasoning doesn't really make sense in today's world of equality......does it? The idea of introducing legislation which encourages companies to employ women in top jobs seems bonkers, but it has apparently been discussed. How would that work? Maybe there are other more subtle reasons for some very capable women, (and probably some men too) for not wanting to occupy these top positions.

I don't personally know many women or men who have what would be perceived as a "top job", but I do know plenty who run their own businesses very successfully. Most of these self employed people are probably considerably better off in terms of the quality of their lives and peace of mind than if they were employed "high flyers". Out of choice most have built a business around an aspect of their lives, some based on skills they gained in previous employment, others by using skills they acquired while at home with young children or through doing DIY jobs around the place. They are all very bright people. What would it take to persuade them to work as hard as they do for someone else and make that person's business successful instead of their own?

Like me for example. My occupation was born out of necessity, we had a houseful of decrepit furniture, it was all we could afford and I enjoyed learning the restoration skills that enhanced the quality of our lives, it was a useful, meaningful challenge. I never considered the fact that my new chosen occupation was male dominated and that potentially once I set up in business no-one would take me seriously as a tiny, young girly, (which I was then!) I must admit, I was taken aback the first time a man at a show came up to me and asked to speak to the chap who did the restoration. Then there were all the other times when a customer would start talking to my husband about a project, then their look of shock and horror when he referred them to me. It didn't put me off then and it doesn't happen at all now I'm older interestingly. I'll never be rich and powerful, but I wouldn't change my lifestyle for anything.

Perhaps there are a lot of women like me who are happy to just do what they do without a fanfare. When you work for yourself there is no corporate pecking order to respect, no terms of employment apart from the ones you set yourself and best of all there's the chance to use those perceived female "weaknesses" to advantage without corporate criticism. In running your own business a cautious nature is good. Attention to detail is a great asset. Quietly getting on with things and ignoring the chaos around you is useful, as is the ability to multitask and not panic in a crisis. The gift of being able to chatter away happily, (sometimes a lot) to anyone, regardless of age, status or anything else is priceless. I know lots of women that can do all of these things in spades!

Perhaps corporates will always struggle to persuade some women, (and men) into the top jobs. When I see someone advertising for an "aggressive, go-getter with ambition to head up our forceful and successful team" it doesn't do it for me I'm afraid! And maybe there are other less stressful ways to fulfill life's needs for a lot of folks. Money, prestige and power aren't everything.

From my point of view life's too short to bicker and fight your way up a corporate ladder. What's wrong with running a business in a ladylike way anyway - it works for me?

Bit of a different blog post for me don't you think, all comments welcomed!
Posted by Kim 2 comments:

What a start to the two weeks of open studios in Dorset, so sunny and very warm. Stewarts Garden Centre sizzled under a cloudless sky. Bernard's parking space was already reserved when we arrived on Saturday morning, it didn't take us long to set up and start work. 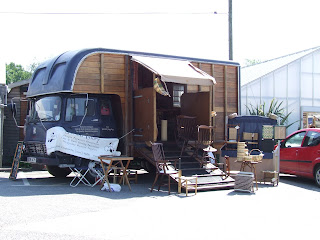 The garden centre is such a beautiful place, tucked away in the village of Holt, just a short drive from Wimborne and the coastal towns of Bournemouth and Poole. Everyone is so friendly and helpful there, the centre is full of gorgeous plants, gift ideas and the food in the restaurant is to die for - proper home cooked and fresh! It's no surprise that so many people visit.

We were in the shade for most of the morning and managed to weave a couple of footstools each day. Here are the first two, a hand made rattan stool we've christened "Wedgwood" and a restored vintage pine stool. 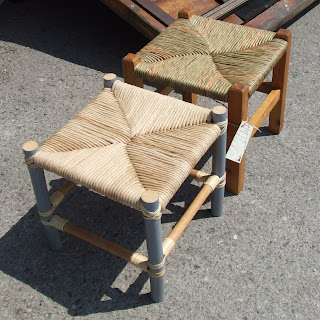 We also finished the "cricket" stool and another hand made taller rattan stool. 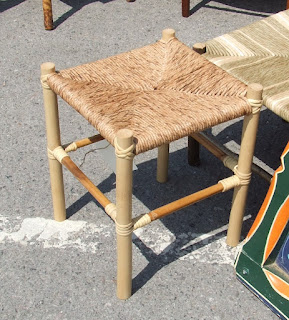 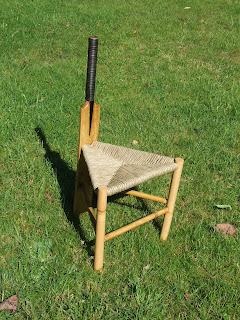 Need to make some more frames now, two more weekends to go.....will the weather hold?
Posted by Kim No comments:

Sunshine and the show season begins

After weeks and weeks of rotten weather, Dorset is sunny at last! Up to 25 degrees yesterday with little or no wind - bliss. We're hoping it hangs on for a while, Dorset Art Weeks starts this weekend, a great idea which happens once every two years. Lots of red and yellow signs appear all over the county directing you to studios, workshops and galleries that are participating in the event. It's a great opportunity to see artists at work in their own environment doing what they do.

We took part for the first time two years ago. Stewarts Garden Centre hosts an event. The garden centre is a really inspiring place in a gorgeous location and during Dorset Art Weeks they invite a few local folks to come along to demonstrate and exhibit their work. Last time there was a potter, a textile artist, a furniture maker, a stained glass artist, a sculptor and us! We had a great time. 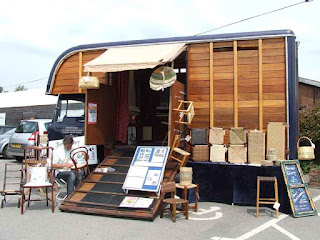 We were set up with horsebox Bernard in the car park, (the weather was good two years ago too!) It was lovely to be out of the workshop, in the fresh air for a change and we met some really interesting people. If you get the chance, please have a look at the DAW website, there are loads of events all over Dorset for the next two weeks. Come and say hello, or take a leisurely drive around this beautiful county and follow a few of the signs!

We've made some footstool frames especially and will be weaving seats on them during the event. Here's a preview.... 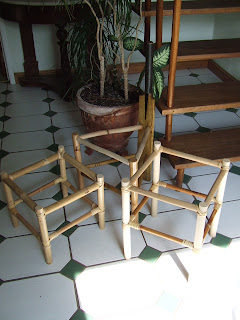 The "cricket" stool is recyled from an old child sized cricket set.
Posted by Kim 3 comments:

Well Mum in Law's funeral took place on Wednesday, so needless to say that this week has been topsy turvy. But a new week has dawned now and we are back to work with a vengeance. Life has to go on.

We spent what turned out to be a lovely sunny, warm weekend sorting out rattan again. We've got tons of the stuff. Everything from 32cm diameter Tohiti to fine 2mm golden Palembang. The problem is that most of it is over 15 feet long and our courier will only deliver parcels measuring up to 10 feet. Going to have to get our thinking caps on and work out what quantities we can retail! This is just a very small sample of what we have - the "overspill" in the horsebox yesterday morning before we sorted through it all.... 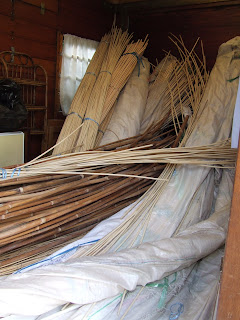 We took most of it to the yard where there are now two very full containers!

I've bought some odd lengths of various poles home to the workshop so that I can experiment, a local journalist has asked me to do some bits for an outdoor feature in a magazine this August - could be fun!
Posted by Kim No comments: