Well after much fear and trepidation I finally did it! Today is the first day that it is possible to buy our training DVDs through Paypal buttons on the website. We've talked about setting it up for months, but like a lot of things, it takes time to do - a lot of time that we don't have to spare - mainly my Sundays. Hopefully the buttons will make things a lot easier for a lot of people. We're always being told by so many folks that they can't phone us during normal working hours to order, especially from overseas, so here's hoping Paypal can oil the wheels for them. The link to the Paypal buttons is available at http://www.formerglory.co.uk/webdoc10.htm 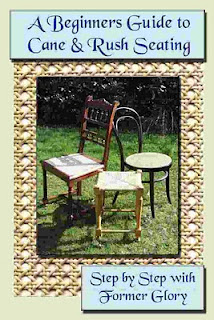 Oh dear, I'm still worrying about it....even though I've tested the system to within an inch of its life.
Posted by Kim No comments:

Following on from the driftwood chairs in the last post, the pretty Arts & Crafts chairs that we started last week went home yesterday and they too were woven in the thin version of the same paper fibre material. 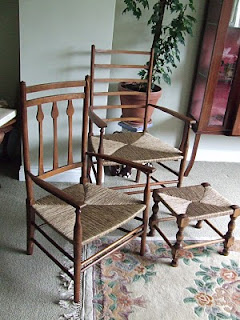 The little stool was also purchased by the same customers and woven to match. A handsome trio! 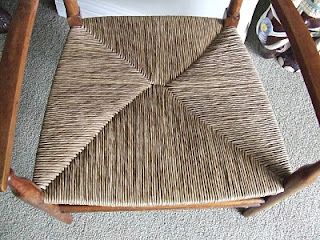 A good substitute for hand twisted real rush, the paper is quicker to use and gives a good hardwearing seat that is not as attractive to pets as the real thing - it doesn't smell of the river, sea or fish!
Posted by Kim 3 comments:

One of our regular customers is currently working on a really exciting commission. He has been asked to rush weave the seats of 20 hand made driftwood chairs of which 12 are to tour the world raising awareness of environmental issues! He has made a lovely job of them too, have a look here
The seats are woven using paper fibre that we have supplied which is made out of wood pulp from renewable resources.
We're all very proud of you Kevin, lovely work!
Posted by Kim 1 comment:

These two beautiful chairs arrived this week, I love them. They are both typical of the Arts & Crafts Movement, practical and yet pretty to look at. The first one is a simple Philip Clissett type with a tall, fine ladder back... 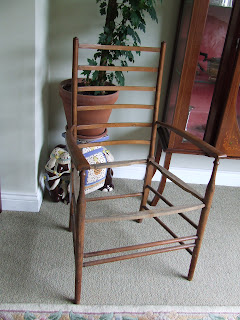 The second is a sweet child sized chair typical of designs made for Liberty of London at the turn of the 20th century... 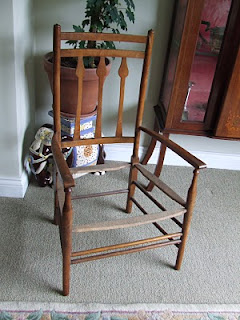 It's hard to believe that these chairs are over 100 years old, they just look so modern! So far they have been re-glued ready to be re-rushed next week. I'm looking forward to it, they will be such a pleasure to work on . Meanwhile I'll have to find time to work on the other chairs that turned up this week - six more Wegner Danish dining chairs!
Posted by Kim No comments:

I know I said that I wanted to play with some new creative ideas, but wasn't expecting one of the projects to be a Cat House!
We have two elderly cats, Sybil and Rodney. Sybil is Rodney's Mum, she was born in September 1992, Rodney in April 1996, so they are almost 18 and 14 now! For many years we would breed two litters of persians a year, it was my passion, a hobby, I loved it. But to look after any animal properly takes a lot of time and for the last few years we haven't had any time to spare. Sadly my hobby had to come to an end. So just these two lovely old moggies remain - the last of the line and I was there when each of them drew their first breath. Neither of the cats have ever been allowed to wander, they are either in the house, in the Cat House just outside the kitchen door, or in the garden with us. From their  outside house they can watch us through the kitchen window from their various perches when we're cooking. And they can moan at us when they think they're being ignored!
Anyway, the weather was so good on Saturday that I thought it was high time I did a bit of reorganisation in their run. The cats were ushered into the kitchen whilst I demolished everything and started a rebuild of their house, I got a bit carried away.......... 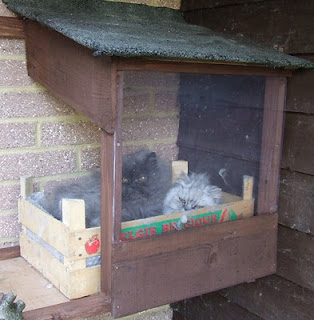 So they now have a window on the World! The orange box is temporary until I can make them a new enclosed bedroom. When that was finished, I thought I'd give them some scratching posts and perches. 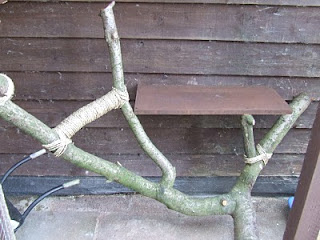 Trouble is neither of them wants to climb the tree yet! But they're quite keen on the child sized wheelbarrow.
Posted by Kim No comments:

With thoughts of getting the truck ready for the "show season", we've realised that we must also start thinking about preparing some exhibition stock. Last year I made a few splint baskets to add interest to our display. It made a change and happily they were well received. So this year it would be good to make some more adventurous ones. Another reason for wanting to make baskets - I strained my back at the weekend while digging in the garden, so a gentle sit down job will suit much better just now than trying to walk round a chair pulling and tugging at the seat!! 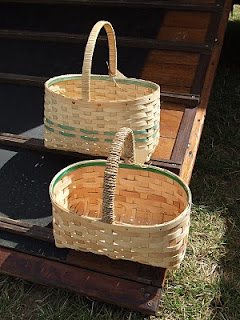 I enjoyed dying the splint and mixing the different tones of colour together, so perhaps this year I'll be a bit bolder with some of the colours. I also made a few baskets in non traditional shapes which were sold very quickly, so maybe I'll have a go at some more outrageous ideas this year.
If I can give myself a little more free time, (ha ha), it would be nice to play with some of the other ideas I want to experiment with, but as usual it seems like that's unlikely to happen.
Posted by Kim No comments:

Over the weekend we've worked out everything that we will need to rebuild Bernard's nearside wooden "Luton"! We also started him up again and this time his clutch wasn't seized. I spoke to Mr Oakley at Oakley horseboxes last week and yes, he has all of the parts that we need. So in the next few weeks we will be taking the whole of this section to pieces: 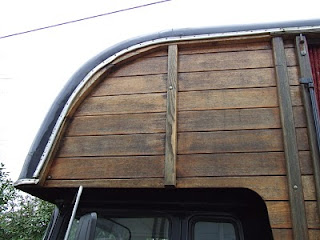 It doesn't look too bad in the photo, but we know that when we did the first restoration of this area almost six years ago, it had been attacked by death watch beetle and the damage they caused had allowed water to seep in causing rot, especially behind the ash upright. We replaced the ash curve because there was nothing left of the original and we let in small sections of mahogany to repair the planking behind the upright, but we always knew that it was a short term solution. Likewise the glass fibre roof section had been so bashed over the years and had been so badly repaired that we knew that this too would need more work later. So taking this whole section to pieces will allow us to replace the planks, repair the roof and replace the guttering. Doesn't sound like much when you put it like that does it?!! However, this has got to be done and the whole truck restored by...............April 29th, because we are at our first exhibition on May Day.
Posted by Kim 1 comment:

We've had our heads down this last few days and finally it seems to be paying off. The backlog is not quite so bad now. Eight rush chairs, three cane chairs, two drop in rush pads and a Wegner Wishbone finished - great! My hands ache, but that's because the eight rush chairs were woven in very thick pre-twisted rush and even though we soaked and mellowed it overnight, it is still a lot harder to use than regular thickness.

We've also had some interesting conversations recently. Two on the same day were with professors, one in forensic science and the other in botany. The forensic scientist paid us a visit, (what on earth for - you may ask?!) well because rattan is being used experimentally in nano technology!! It's fascinating. When the research paper is written I have been promised a copy and hopefully I will understand more of the role that the rattan has played in the experiment, I'll keep you posted.

The second professor wanted information for an American colleague who is currently researching scirpus - it's areas of growth and commercial harvesting. We talked for ages about the work of Seidel in the 1950's-70's. Seidel was a remarkable lady who was way ahead of her time. Her research work is only now being fully appreciated. She was very determined and was eventually to discover and prove the amazing cleansing properties of scirpus to her mainly male colleagues. It turned out that the lady professor I was talking to had met this remarkable lady in the 70's and called her "an inspiration".