I think most people have heard of the "Mouseman", or to give him his proper name, Robert Thompson "The Mouseman of Kilburn". He was a prolific maker of English Oak furniture in the 1930's who preferred to stick to traditional methods and tools to produce his designs. His major influence was medieval simplicity, a single worker could make one piece in its entirety - no production line. As a result, each piece is unique with a texture all of its own. Robert Thompson started to mark his work with a carved mouse in the 1920's, apparently to begin with the mouse even had carved front legs, but as these broke off a little too easily, the mouse was redesigned and this is one way that collectors of his furniture can date a piece. The company still exists today, they have a website here: 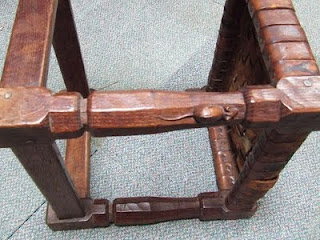 It's lovely! The little mouse's face is so well carved and the oak has a really soft tactile finish, even though you can see the marks of the hand tools clearly, every surface is smooth to the touch. The owner remembers it from when he was a very small boy and it wasn't new then, so we estimate this is a very early stool from the 1930's. He loves it and would never part with it because the little mouse brings back so many memories for him, it's part of his family.

All we need to do is to replace five of the leather seat strips, they have broken - the weaving itself is not a difficult thing to do, the hardest part will be cutting and aging the new leather strips to match the old ones! A little job for tomorrow.
Posted by Kim

oh oh oh! i first read of the mouseman donkeys years ago, and ive always had my eyes open for a piece somewhere, I often have a good look at old furniture on bootfairs etc! I would absolutely love to own a piece!

I'd love to own one too Leanne, but I don't think I'll be that lucky!!!

I love the little mouse, he's so sweet and like you both I would love one too.

I've mentioned your blog in my post and linked to your 'Being an Exhibitor' posts.

Aaaaw Jan, you're so thoughtful thank you! x