The first thing we did yesterday morning was to look out of the window.....were the weather men right, or please just this once, would they have got it wrong? No such luck, this time they were dead right. The wind was blowing a hooley, trees bending almost sideways under the force, patio furniture all over the garden. Oooh no, not again. We'd already heard on the local news that there had been flooding on the road leading to Holton Lee, and trees down all over the place in Dorset, all in all not a good start to a Summer Fair!

We set off at 10am. All along the dual carriageway the horsebox was swaying like a ship at sea, now and again a huge gust of wind would push us into the grass verge, or worse still, towards the middle of the road - not a good omen. We arrived late, thanks to the heavy traffic as much as the weather and it quickly became obvious that an awful lot of people had decided that staying at home was the best option on such a rotten day.

Yet again we had to say thank goodness for Bernard. Our trusty old truck is the best wind break in the world. We stood in the shelter of his bulk all day and managed to rush seat two chairs without any problems, but for everyone around us sadly it was carnage. Every so often the wind would blow a gale, the stallholders were hanging onto the frames of their canopies - literally - hoping that the wind would drop soon, but it didn't. By the end of the day no less than five canopies were wrecked, mangled heaps. It was so saddening. One couple had parked their car behind the stand and tied their canopy to it. Eventually the canopy frame was so distorted that they had to take it down, revealing two massive dents in the wing and door of their car where the wind had bashed the legs against it with huge force.......There were several standholders left sitting out in the elements with no shelter. I forgot to take the camera, but here's a photo, (not great quality) taken with our ancient phone. 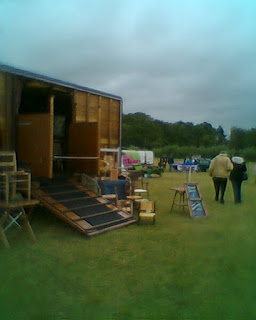 Bleak - almost midsummer and everyone is wearing a coat - it was such a shame. The fair itself was really well attended by the supporters of this lovely place and the ring events, music, activities and facilities were great. The children had a fab time trying on police uniforms and hats courtesy of the local police represented by a lovely lady officer who was parked next to us. She had such patience with the kids, giving them guided tours of the police van and handing out pictures to colour in.

So who'd be an event organiser? No matter how hard you try or how carefully you plan, you can't predict the weather.
Posted by Kim