Vico Magistretti and the countdown to Christmas

Not long to go now before the holidays. As usual we are trying to clear the decks so that we can bring the dining room back into commission for Christmas Day. Because it hardly gets used during the rest of the year it tends to be the dumping ground for surplus stuff, so it's generally at this time that we have to do a clear out. This year we have a bit more than normal stored in there, mainly due to having to clear Mother-in-law's house. But now that the house has been sold, the bits that are left can't multiply, (I hope) so once we find new homes for these last few bits and pieces - that's that!

On the work front we have a few rush seats to weave and return to their owners before next week, all other restoration will start again in the New Year. We're just about to finish the last drop-in pad of a set of three for some Vico Magistretti Carimate chairs, this time using "reel rush", a pre-twisted natural material. We see a lot of these, most of the earlier dining sets dating from the 60's seem to have been woven traditionally using hand twisted rush, perhaps these were the first chairs made by Cassini. Later versions from the late 70's onwards have more varied seat materials. The set that we are restoring at the moment are from this sort of period and were originally woven using pre-twisted natural material, so we are replacing them "like for like". The original seats had only just worn out, so I guess it proves that the pre-twisted material does have a good long lifespan and also that it has been around a lot longer than people imagine. Here's a picture of the old "reel rush" on the underside of the final seat pad we're working on. You can see around the edge where the frame protects it that the material was very green to begin with. 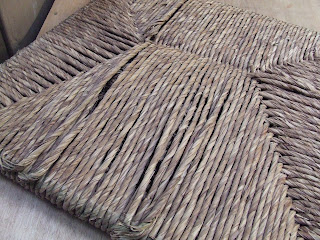 For comparison, here's a picture of the two newly woven pads alongside the old one. It'll be a few years before the new seating fades to the muted golden colour of the old one. 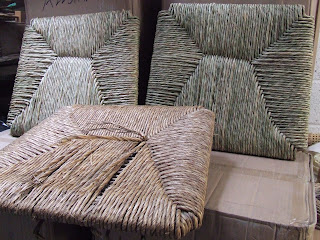 I like them when they're green.
Posted by Kim

I have this sort of chairs in my kitchen, they are very strong.

They're very popular again and getting collectable, worth hanging on to!