In thirty years of living in this village, I think we have only seen about thirty days of snow and incredibly four of those have been this year! We were supposed to be visiting members of our family 150 miles away this weekend so awoke at 6.30am all set for the journey only to find that about two inches of snow had fallen during the night. After quick phone calls we all decided that it would be daft to try driving so far in snow and abandoned the idea, which was just as well because two hours later, four inches of fresh snow had fallen along our route and locally several trucks had blocked the main road on a hill, it was too slippery for them.

So we went shopping locally instead, (just in case we get REALLY snowed in) and I went for a lovely walk around the edge of the village with a camera. Here's a view of the old railway track that is now a public footpath. 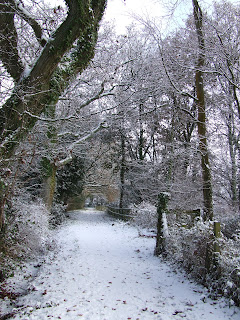 this is a copse just a little walk from the path 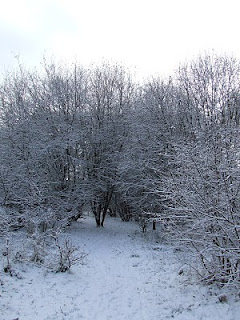 And my favourite, the field where our old dog used to have a good gallop every day. 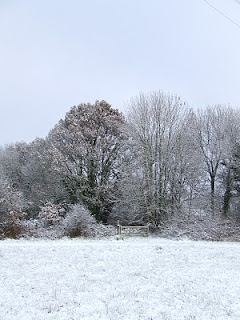 It's cold, but we really are lucky to live in such a beautiful place.
Posted by Kim

Looks like the Robert Frost poem--- "whose woods these are I do not know" etc.
Wonderful pictures !
We had 15 inches last week !
Jan N USA

Thank you Jan for reminding me of such an evocative poem! I'll post some of the other pics I took along with the poem in full, I'm sure lots of people will enjoy it.