Bringing Bernard out of the Winter

It's getting around to that time of the year again - Bernard is going to need his annual Spring clean and restoration. We start his engine and run him around every fortnight or so during the "off season" but with all that has been going on for us lately, we forgot for a few weeks.
So last weekend when we started him up he bumbled into life happily as usual, but when we tried to move him  there was no chance - his clutch had seized and he wasn't going anywhere. We bounced him, put him in gear and turned the starter motor, everything, not easy with a 5 ton truck,... and then suddenly... thank goodness, the clutch made a loud PING noise and freed off! This was such good luck, because the mechanic that knows our truck well  and has even made a special tool to free off the clutch because it happens so often, is currently living and working in Antarctica with a team of scientists and won't be back until next year! Phew, another sobering lesson learned, don't ever forget to exercise your truck. 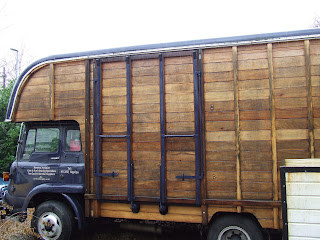 The weather hasn't been kind to the woodwork this year, so we really have our work cut out to get it up to perfect standard again. All of the finish will have to come off  the wood and the blacking caused by oxidization will need to be removed before we can put on a new finish. Bernard was made by a company called Oakley who still make horseboxes today, except they're a bit more luxurious than Bernard to say the least! Have a look here. Last year at the Game Fair we met Mr Oakley and three of the workforce when they came onto our stand - they were so lovely, they liked what we'd done with Bernard and wanted to take a photo!! It seems that they still have some bits and pieces in their workshops that we desperately need to restore parts of Bernard, so our first task is to speak to them to find out what they have and if they can help us. I have a feeling that this may be a long job.
Posted by Kim

I so wish I could have come to meet you guys and see Bernard when I was over in the UK in 2006 on that Fellowship and stayed with Olivia Elton Barratt! Would have been so much fun! From the pictures I've seen though, he's a mighty fine truck and very serviceable for your needs. Thanks for the update, keep us posted.

Yes, it was a shame we didn't get to meet, it would've been great - never mind, come see us next time you're over, we'll take you for a very slow spin in the truck! Or maybe we'll come over to see you one day............without the truck!